The 13th EU Camp has begun

The Hungarian Youth Council of Romania, the Executive Presidency of DAHR, Kós Károly Academy and Wilfried Martens European Studies Centre organized the 13th EU camp which has begun on July 27th, in the afternoon. The camp has a new location this year; it is hosted by Natur Air Park in Sub Cetate.

Day zero started with registration, then, campers could attend 4 presentations.

Balázs Orbán, research manager of Századvég Foundation: conflicts of interest in the shadow of Brexit.

At the first presentation of the event, EU Camp participants could attend the complex debate of questions raised by the withdrawal of Great Britain from the European Union, the difference between generations, regions and political attitudes and their consequences. Balázs Orbán, research manager of Századvég Foundation, mentioned that the United Kingdom’s loss of power in the last one hundred years and its „Slicking into Europe” policy based on this could be made responsible for the increasing Euroscepticim of the island state that culminated probably in the recent criticisable steps of the European political elite. And, however, the Eurosceptic population increased approximately by 10% in 2016 was enough to vote the withdrawal, we learned form the presentation as well that “there are no methodologically assessable plans about the direction of post-BREXIT United Kingdom”. Thus, it is not surprising that forces supporting remaining impute the right of decision to the Parliament that has much more significance in the British political history than the referendum.

Related to the discrepancy between the Western and Central European member states’ political attitudes, the firm pro-Union attitude of the eastern regions and the related negative opinion on Brexit both from Romania and Hungary were mentioned.

Common sense requires renovating our monuments. It is our common interest to attract tourists with our architectural heritage and our community should enjoy its benefits– emphasised Csilla Hegedüs, executive deputy president for culture of DAHR, who held a presentation entitled Timeless heritage on the first day of the EU Camp on Wednesday, July 27.
“Twenty years ago a few young people wearing shorts decided to change the ruined state of Bonţida Castle. We did not really know where we would like to get but we could not tolerate any longer its deplorable state” – recalled the beginning Csilla Hegedüs, leader of Transylvania Trust Foundation that undertook the works at that time. We can approach monuments in many ways– considers the culture professional, according to her: some regret the past with them, in the case of Bonţida Castle for example the memory of Bánffy Miklós can be proudly recall. “But there are also those for whom ruins mean an impossible task, they see community interest in renovation, perpetuation. Our renovation project moved Bonţida away from destruction” – added Csilla Hegedüs.

In her presentation, the executive deputy president drew attention to the fact that modern man should take advantage of architectural heritage, mainly the young people can benefit from its effect, those who can breathe life in it. Then, she mentioned as an example the Electric Castle festival. “Bonţida has no chance to survive if it cannot bring joy to the young people. A monument in vain is the coolest museum. If the young people do not need it, there is no chance to survive” – she explained, then, gave an example: Bánffy Castle was ruined over the years because nobody wanted to use it until eighteen years ago.

In the afternoon, the main topic of the youth round-table discussion “What ails you?” was this year’s local elections and the role of the young people at the elections and in public life. The participants at the round-table discussion included Ionuț Țața, president of Pro Democrația Association, Sergiu Papuc representative of the youth organization of the Social Democratic Party (TSD), Csongor Oltean, vice-president of MIÉRT, president of HÁRIT and Botond Talpas, regional vice-president of MIK, leader of MIÉRT cabinet for foreign affairs.
The youth leaders agreed that during the local elections in 2016, compared to previous years, more young people were included both in the Hungarian and Romanian parties’ candidate lists, more young people would like to assume a role in public life.
Sergiu Papuc, representative of the youth organization of the Social Democratic Party, emphasized that both the Romanian and Hungarian parties must recognize that changes are necessary, common messages are necessary that can address both base. This is how it happened this year in the elections in Târgu Mureş where a newly formed party, the Free People’s Party managed to address both bases. In his opinion, both the Romanian and Hungarian parties must seek to draft common messages. Csongor Oltean, vice-president of MIÉRT, said that between MIÉRT and DAHR a good working partnership was developed in the last years and thanks to this at this year’s local elections 12 young mayors, 3 county councillor vice-presidents, 16 county councillors and hundreds of young local and county councillors will represent the young people’s values and interests both at local and county levels. Botond Talpas, regional president of the Hungarian Youth Conference presented the different methods of election and, at the same time, underlined the importance of common representation. He agreed with Csongor Oltean that as long as the Hungarian minority in Romania has a large number we can expect ethnically based elections. Related to the topic of exodus of young people, Ionuț Țața, president of Pro Democrația, emphasized that this is a topic that must be dealt with by all means since it is one of the most relevant topics nowadays affecting both the Romanian and the Hungarian community. The moderator of the discussion drew the conclusion following the consultation that the young people have an increasing role both in the political and civil society.

Zoltán Szabó: Human kindness depends on man not on religion – The account of Zoltán Szabó was received with great interest in the EU Camp

On the first day of EU Camp the series of presentations were closed with a personal account. The guest speaker was Zoltán Szabó who currently lives in Odorheiu Secuiesc. In the presentation he revealed the process of his dream coming true since he confesses “to be an avid dreamer”. This dream is a journey around the world that he covered by bicycle. According to him, the preparation was a long process but with hard work and great effort he managed to start off this journey. He started off on June 16, 2013 and he was away from home one year and half. He put the experience acquired along the journey into words the following way: “human kindness depends on man not on religion”. His favourite places included Tibet and Nepal. In Mexico loneliness came upon him, so he decided not to continue the journey. He boarded a plane, landed in Lisbon and returned. He concluded the presentation by saying that nobody should give up on their dreams.

The 12th EU Camp has come to an end

The Hungarian Youth Council of Romania, the Executive Board of DAHR, Kós Károly Academy Foundation and Wilfried Martens Centre for European Studies organized the 12th EU Camp for this year. In the Camp located in Izvoru Mureşului there were 280 participants attending more than 30 seminars. „This year’s camp was different from the previous ones. […] 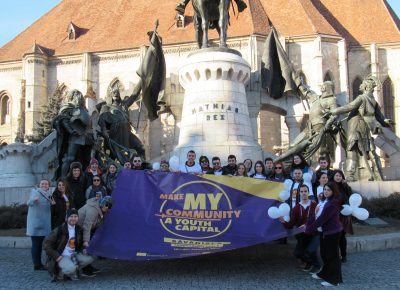 Azeri youth is impressed by Cluj-Napoca – Study visit entitled Make my community a youth capital! has come to and end

The Erasmus+ project organized by Hungarian Youth Conference from Romania, in cooperation with the National Agency for Community Programmes in the Field of Education and Vocational Training took place last week, between 13-21 January, 2017 in Cluj-Napoca and Savadisla, Romania. During the week young people from 9 european countries took study visits and met the implementers of the Cluj 2015 […] 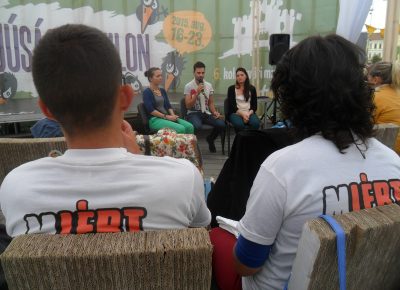 On the 6th Hungarian Days of Cluj-Napocaduring the Friday programme held in the Youth Pavilion exchange students spoke abouttheir studies,experience and travels. Zsuzsanna Nagy, Karola Kotró and Lóránt Korodi-Vass shared their experience with the interested audience during the free discussions entitled See the world! organised by MIÉRT. The three former students had the opportunity to study in […]