HE Paul Brummel, Ambassador of the United Kingdom to Bucharest, held in Sub Cetate a presentation entitled “Brexit – The official story” on the last day of the EU Camp. Every year the EU Camp deals with current public life and political topics that young people are mostly interested and affected. The British referendum on withdrawal from the European Union is undoubtedly one of the most prominent topics of this year.

His Excellency, the Ambassador of the United Kingdom to Bucharest talked in the EU Camp about the referendum and the steps following it. He said that withdrawal from the European Union does not mean also withdrawal from Europe. Great Britain will take part in the European and international issues just like before the referendum, since it remains member of NATO, permanent member of the UN Security Council, of the G7 and G20. He emphasized that the Romanian-British relations have two pillars: security, economic development and welfare. He ensured us that Great Britain and Romania will continue to keep good strategic partnership.

Related to the post-Brexit situation of the EU citizens, he emphasized that until the completion of withdrawal negotiations they will benefit from the same rights as before the referendum. Concerning the referendum turnouts, the majority of the young people voted for remaining but the old were present for the vote in a greater proportion and the majority of them voted for withdrawal. To the question what is the reason of that and how can young people be motivated to vote, his Excellency’s answer was that young people must recognize that they must take part in decision making, they must have a voice if they want to be adopted decisions favourable for them. He emphasized that one of the premises of democracy is exercising voting right and this has to be recognized by the youth.

Related to the forthcoming parliamentary elections, he encouraged the campers to exercise their voting right if they want to enforce their will. 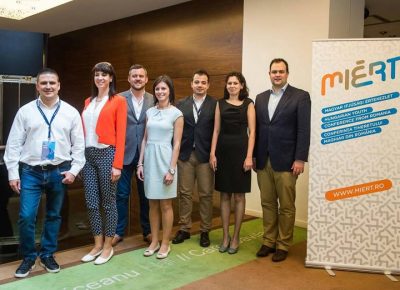 The Council Meeting of the youth organisation of the European People’s Party (YEPP) took place between 19 and 22 May in Bucharest under the heading: „New Narrative for Europe”. The event was organized in Bucharest by the National Liberal Youth (NLY) and the Hungarian Youth Council of Romania (MIÉRT) in partnership with Konrad-Adenauer-Stiftung (KAS) political […] 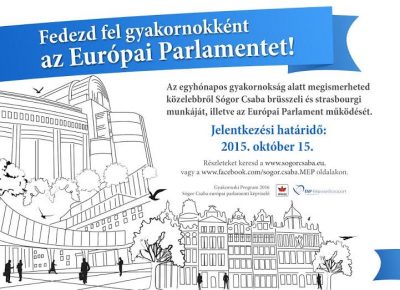 Discover the European Parliament as a trainee!

Csaba Sógors’ trainee programme shall continue in 2016, too for which Transylvanian students and youth professional can apply. The winner applicants can spend one month as trainees in the DAHR politicians’ Brussels and Strasbourg offices.  Since 2008 Csaba Sógor has received at least ten Transylvanian young trainees in his European Parliament office every year. During […]

Lóránt Antal, President of MIÉRT and Imre Geréd, Executive Vice-president for youth affairs of DAHR went on a media tour.  The two leaders spoke in Paprika Radio, Szabadság daily newspaper and Erdélyi Figyelő about the election of Imre Geréd, the opportunities involved and the future of the Hungarian Youth Council of Romania. „Politics should be […]