“Last year we launched a successful cooperation with two youth organisations from Hungary –the Young Christian Democratic Union (hereinafter referred to as IKSZ) and Fidelitas–and as a result we managed to open four info centres in Transylvania: in Satu Mare, in Trei-Scaune through the Youth Council of Trei-Scaune, in Odorheiu Secuiesc through the Youth Conciliatory Council of Odorheiu Secuiesc (hereinafter referred to asUIET) the most important result is undoubtedly that the Hungarian Youth Conference as the youth organization with the most members in the entire Carpathian Basin acquired the role of Civil Info Centre” –Lóránt Antal, President of MIÉRT declared in the press conference held on the 13thof May.

“As a result of the solid relations with Lőrinc Nacsa, president of IKSZ , András Kiss, Manager of the Civil Info Centre of Szabolcs-Szatmár-Bereg County and Fidelitas, it has become obvious that we, the youth and civil organisations in the Carpathian Basin have to work together as our interests and goals are the same. The Civil Info Centres shall be established in Transylvania thanks to this very process.” – he continued. “This year we shall mostly focus on helping the civil organisations part of our structure. We shall help them in organizing events, raising funds and what is most, in rendering real information on time.”

Miklós Soltész State Secretary or church, ethnic and civil society relations in the Ministry of Human Resources said that the Civil Info Centres in Hungary operate in a county-based system, and their aim is that the outstanding civil organisations that acquire this title should help the work of the civil organisations in every county in issues related to applications, legal problems and cultural public issues. “Furthermore there is also an outstanding task that the Civil Info Centres have, which was set last year, namely to keep in touch with the counties inhabited by Hungarians abroad.”– he said, then added: “The issue of citizenship is important for the Hungarian national policy, the church is also important, just as education, but the issues related to the Hungarian youth is outstanding, and I strongly believe that the civil organisations of the four counties shall support the youth in staying in place.”

András Kiss, Secretary General of the Hierotheosz Association, Manager of the Civil Info Centre of Szabolcs-Szatmár-Bereg County said that the basis for the cooperation are the many similarities in the work of the civil organisations as they face mostly the same problems, such as staying in their home country, ensuring a living in their homeland.“This is a very important project for us, as thanks to it the Civil Info Centre will not only perform its activity in the county but also with the exchange of experience, it will launch the activities in the offices, the counselling and the event organization that we already have.” –he said.

Imre Geréd, Executive Vice-presidentfor youth matters of DAHR stated that: “As Cluj-Napoca was the youth capital last year, this proves that the youth and civil organisations together with various local and national governmental partners can organize such events that have never been organized before.” – he said, then he stressed that “Having in mind the safety of the Transylvanian Hungarian youth, the youth and civil organisations together with the politicians and the economic actors can create an proper environment for the young who will no longer move abroad but will rather choose to live in their motherland.”

József Zsigmond, on behalf of the Youth Council of Trei-Scaune (hereinafter referred to as HÁRIT), as member of the National Cooperation Fund mostly spoke about the way the NCF works. He said that the Civil Info Centres are a good opportunity for the national organisations to meet foreign organisations. He also emphasised that it was important for the information to reach the rural areas, too, and he said that: “it is also important not to build parallel structures, but rather envisage strong and solid structures, and I think the cooperation is still very incipient in this respect.”

János Fancsali President of the Youth Conciliatory Council of Odorheiu Secuiesc mentioned that the Free Europe Café was established in OdorheiuSecuiesc in 2014. The Free Europe Café has been ever since the most important meeting point for the local youth, where there are not only cultural events but they can also exchange information regularly. “I would like to interconnect the Free Europe Café with the Civil Info Centre because as I can see the CIC supports this process, and what is more it adds another feature by spreading information not only in cities but also in the rural areas.”

Petra Kádár, Vice-president of MIÉRT said that she found the establishment of the Civil Info Centres in Transylvania very important because “the youth organisations call in many financial resources from projects and because the tendering system in Hungary differs from the Romanian system, it is good for the CICs to offer support in this respect. In Satu Mare they would like to offer notonly consultancyto these organisations but they would also like to help them organize various events. Moreover these centres will also focus on building a strong community.” –she said.

Lajos Mile Consul General of the Consulate in Cluj-Napoca on the matter regarding the operation of the Civil Info Centres emphasized the importance of the support given by the Hungarian State, and also that the endeavours and local knowledge is similarly important. He added that the young generation has an important role in organizing the community and representing its interests. “Here this generation will not only have a role in organizing the community but will also represent the community’s interests. Besides representing the community’s political interests, the civil organisations will also take over interest representation in many areas and here I don’t speak only about legal issues but also about civil culture and any other area where that can operate more intensely and efficiently such as in political organisations.”- he stressed. 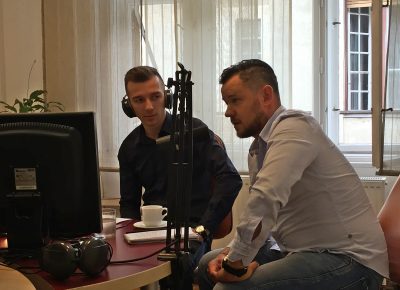 Lóránt Antal, President of MIÉRT and Imre Geréd, Executive Vice-president for youth affairs of DAHR went on a media tour.  The two leaders spoke in Paprika Radio, Szabadság daily newspaper and Erdélyi Figyelő about the election of Imre Geréd, the opportunities involved and the future of the Hungarian Youth Council of Romania. „Politics should be […] 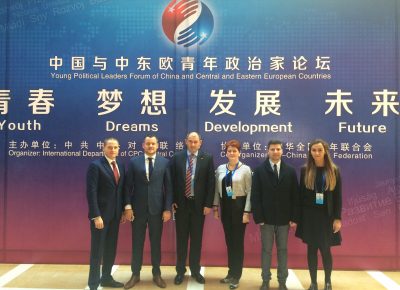 Lóránt Antal, President of MIÉRT participated in the 2nd Central Eastern European Young Politicians Forum organised between 27-31 October. The event organised in China was attended by over forty young leaders from 16 Central and Eastern European countries.The meeting was held under the aegis of the Silk Route project with the aim of strengthening the […] 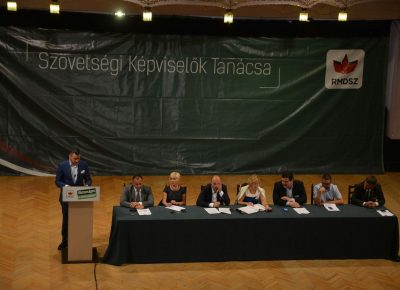 Lóránt Antal, President of MIÉRT, assessed the participation of young people in the local government elections at the DAHR Council of Representatives